When God Calls You, Trust that He will Equip You 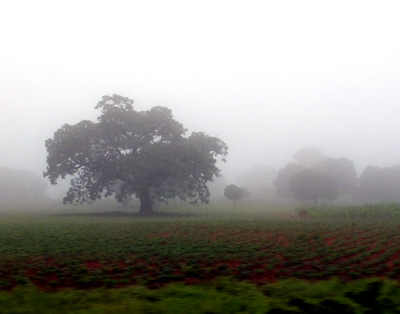 The rain was beating against the window and as I squinted looking through I could see the trees bending in the storm and I wondered what damage may remain once the storm passed. It was Good Friday, 2012 and I was getting the last laundry and packing done for the mission trip leaving the next afternoon. The tornado sirens suddenly sounded and we frantically turned on the news to see if we needed to take shelter. Thankfully, it was north of us heading away, but then the news cut to an emergency announcement that the airport had been hit.

James 1:2-4 Consider it pure joy, my brothers and sisters, whenever you face trials of many kinds, 3 because you know that the testing of your faith produces perseverance. 4 Let perseverance finish its work so that you may be mature and complete, not lacking anything.

It had been months of preparing for this trip, which I had never planned to go on. A friend had been asked to go help at a conference in Africa where her daughter and family were stationed as missionaries. This would allow her to see her granddaughters and their work in Africa. Initially, she was excited to do this, but as reality set in she became fearful of making the trip. She prayed and asked for prayers for strength, but her confidence waned and her fears rose and she was reconsidering making the trip.
As she was struggling with her decision, God had put it on my heart to offer to go with her. I had argued with Him myself about up and going to Africa and had shared this with my husband. How would we work out the logistics and how would I leave my family for a month? It finally came to the point that she announce she was not going to go. Before a second thought, I heard myself offering to go with her. With startled delight at my offer, she jumped up, grabbed me and hugged hard. I already had an email from her daughter when I arrived home stating they had been praying for her Mom make the trip and I had answered their prayers. The details of the trip fell into place as if it was planned all along with one last open seat on the plane, one remaining open bed at the mission house and more. We worked together gathering needed supplies for a children’s bible school to hold at the conference and filled four suitcases with project needs and missionary requests.

Joshua 1:9 “Have I not commanded you? Be strong and courageous. Do not be frightened, and do not be dismayed, for the Lord your God is with you wherever you go.”

Our heads and hearts were spinning with the reality of the closed airport. What does this mean for our trip, for our planned projects, for God’s plan? The delay would make us too late to meet up with the missionaries and make our planned event. Some said we needed to heed the warning and not go. We felt confused, uncertain and my friend’s fear of going on the trip came back in full force. These are the times in your life when you just want a clear answer from God, you beg for a clear answer from God, but nothing is clear. These times when emotion is high and it is difficult to wade through all the confusing thoughts and events to be certain of a decision.
I found that taking time to reflect on the path you traveled to get to the place where you are will give perspective. God would not have put this on my heart to pursue and make happen if it was not His will for it to happen. God would not have made everything fall into place and open the door for this opportunity to go do work for His kingdom to then just close the door. So I became more convinced than ever and was driven to make this trip happen and took action. Calling airlines and shuffling tickets until 2 a.m. gave us the option to drive to Louisville airport, two states and five hours away and make our connection on to Africa. So at 6 a.m. we filled our van with suitcases and the last of our supplies and headed towards Louisville, not stopping to think that we will be driving with the storms still moving through the area.

Driving through blinding rain and severe wind, my husband tried to go as fast as he safely could. My friend and I organized and packed our suitcases in the back of the van, having no idea if they were over the weight limit. Then halfway through the trip we realized that we were going to cross into the eastern time zone and will lose an hour. We were overwhelmed with the new realization that we may not make our flight after all or if we did our luggage may not. We were, once again, questioning if this trip was meant to happen or what we were fighting against.
I immediately called a friend and asked her to find the Louisville airport phone number. I called the airport in the hopes that the storms had delayed our flight. No such luck. I then explained the situation and was told they really could not help me. I asked if there was anyone else I could talk to and they gave me the number to the management office at the airport. I desperately dialed again and management told me there was nothing they could do so, I asked if I could talk to baggage. I just thought I would clarify what the cut off time was for luggage on our flight so we would know if it would make it on board. They stated they do not normally let calls through to these departments, but I could try. Amazingly, a young man named Dennis happened to answer the phone and I explained our situation. He stated he was actually working on loading our flight and our luggage would not make it if we arrive at our expected late time. We were defeated, but drove on in the storm.

Our van squealed into Louisville airport and my friend and I jumped out and ran to the desk. The board was blinking that our flight was boarding and we ran past the long line and up to an empty desk and explained our situation. Thankfully, a manager checked us in quickly as our husbands hauled our luggage to the desk to be checked. At that moment a young man came running up the corridor to the desk. He looked at us and asked if we were the ones who called. Yes! We had called! He said he was Dennis and to give him our luggage and he hurried back down the corridor struggling with an overloaded cart with 200 pounds of our precious cargo. We gave quick hugs goodbye and ran to security. Our fidgeting and sweating did not give security confidence that we were innocent travelers, so we were pulled aside for further checking. I tried to calmly explain our situation, the tornado, the time change and that our flight was already boarding. When the very large and intimidating TSA agent heard all of this, he let us go and wished us good luck as we ran off.
We ran up to the gate and were the last two through to board. When we got to the door of the plane and there stood Dennis, out of breath and sweaty with a huge smile letting us know our luggage made it on. We gave him big hugs and thanked him as we scurried onto the plane. The plane bounced through the storm clouds to New York. We made our connection and were relieved when we landed safely, with our luggage, in Ghana.

God had started this journey and presented us with challenges which I would have never dreamed of. We could have given up a number of times and would have felt justified in doing so. When you look at the path you have traveled and how God has been at work, that is the time when you gain clarity and assurance. It is undeniable when you see God at work and what He can do, how He can put solutions, people and situations in place to help you persevere for His glory.

Isaiah 30:21 Whether you turn to the right or to the left, your ears will hear a voice behind you, saying “This is the way, walk in it.”

Little did I know the future plans God had for me! This challenging trip developed into a mission outreach and grew into a nonprofit organization serving marginalized women and girls. We are currently educating, distributing needed supplies and building a boarding school and tech center to give girls a safe place to live, learn and have hope for a better future! So when you come up upon obstacles in the path of where you believe God is sending you, don’t give in or give up! Don’t let your doubts or difficulties stop you, because God will equip you for where He calls you.

2 Corinthians 9:8 And God is able to bless you abundantly, so that in all things at all times, having all that you need, you will abound in every good work.